Are you ready for the full taste of cinnamon?

Have you recently enjoyed the fantastic taste of cinnamon? We want to introduce you to this spice, the use of which goes far back in history. The rich taste of this spice is accompanied by numerous health benefits. The next time you enjoy a fantastic cinnamon roll waffle remember how great cinnamon is.

Cinnamon has been used for thousands of years. Since the time of the oldest history, the use of cinnamon has been known in China, Egypt, the Middle East. It is mentioned in Chinese writings in 2800 B.C., in the Old Testament, by writers in ancient Greek. Its botanical name derives from the Hebraic and Arabic term common, meaning fragrant spice plant. This spice was a valuable commodity from ancient times. It was once so highly prized that wars were fought over it. It was even used as currency, and it is considered to be one of the first traded spices in the ancient world. It was so esteemed that was used as a gift to rulers, even to deities.

It is made by cutting the stalks of cinnamon trees. The inner bark is then extracted, and the woody parts are removed. When it dries, it forms strips that curl into rolls, called cinnamon sticks. These sticks can be ground to form a powder.

Its spicy aroma intensifies both sweet and savory foods, and you can find it in cuisines from around the world. Its bold and distinctive flavor adds intensity to many dishes. There are almost endless possibilities for using this spice. Throughout its history, it has been used as both a spice and as a medicine. It has unique healing benefits that come from its essential oils. Medieval physicians practiced cinnamon in medicines to treat coughing, hoarseness, and sore throats.

In 2017, four countries accounted for 99% of the world’s total production: Indonesia, China, Vietnam, and Sri Lanka. There are different varieties of cinnamon from different countries. Cinnamon’s flavor is complex, and it has its unique flavor in both the ground and stick form. As far as we are concerned one of our favorite cinnamon flavors is one in our cinnamon roll waffle.

Now that you’ve found out how fantastic cinnamon is all you have to do is take a look at our menu and order your cinnamon roll waffle or visit us at one of our locations. 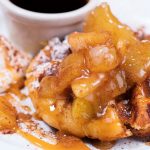 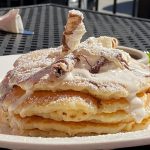