We are sure you have all heard of Caesar. One of the most famous rulers of the old world and one of the symbols of the Roman Empire. And Caesar and Cleopatra are certainly one of the most famous couples in history. The life of a great monarch certainly brought luxury and extravagance, and today perhaps most notable salad is named by the same name. That’s right, Caesar salad.

Yet, this salad has nothing to do with Caesar. At least not with this one.

While we may associate Caesar salad with endearingly clichéd Italian restaurants, the genuine truth is far more intriguing. It’s a story of immigrants, prohibition, and a few raw eggs, and we’re still joyfully eating Caesar salad over a century later.

Caesar salad’s genesis story is a little hazy, but one thing is certain: it was developed by Caesar Cardini, an Italian-American immigrant working in a Tijuana restaurant. A restaurateur and Northern Italian immigrant.

Cardini ran a very successful restaurant in San Diego. Prohibition was imposed across the United States in 1920 by Congress, which pretty much affected the business. So, while Cardini kept his San Diego restaurant running, he opened a second location in Tijuana, where he could serve alcohol. During prohibition, Tijuana was the hangout for Southern California’s upper crust.

The Caesar salad was created in Mexico, most likely less than a mile south of the United States-Mexico border. With dramatic flair, Caesar creates the salad. The ensaladero combines chopped anchovies, garlic, Dijon mustard, pepper, Worcestershire sauce, egg yolk, and lime juice in a two-foot-wide wooden bowl. The emulsification process begins with a stream of olive oil swirling in with a rhythmic, hypnotic intention. Then a hearty sprinkling of Parmesan cheese to tie everything together. Finally, the dressing is applied to romaine lettuce leaves.

Now, there are various other versions of the narrative, with some claiming that Caesar was not the one who originated the salad. It was allegedly created by Caesar’s brother Alessandro (or “Alex”), according to one account. Another story claims that the salad was invented by Livio Santini, a Caesar’s restaurant employee, rather than a Cardini. Santini, who is also an Italian immigrant, said it was his mother’s recipe. Caesar Cardini claimed ownership of the recipe once it became so famous.

We certainly show great respect and importance to whoever is responsible for the creation of this fantastic salad.

That is why we invite You to stop by one of our locations and treat yourself to our Classic chicken Caesar salad. You will not go wrong! 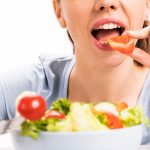