If Adam only knew

Probably the most common fruit in the world. The fruit that costs Adam and Eve life in the Garden of Eden. It is an interesting fact that the apple is not actually mentioned anywhere in the biblical text. Adam ate the forbidden fruit. But the general popularity of the apple has led to the fact that the vast majority of people today believe that it was the apple in question. So, the apple became a forbidden Paradise fruit.

Apples are native to Central Asia, and were later introduced into Europe, North America and East Asia. The use of apples as a food date back to as early as 2000 BC. Apples were originally grown in Western Asia but then spread around the world. The apple tree is classified as Malus domestica in the rose family, Rosaceae.

In many cultures the apple occupies a very important place. In the Chinese culture, the word for apples is pronounced as ‘ping’ which also stands for peace. This is why apples are a favorite gift to give when visiting someone in China. Greek and Roman mythology suggested to apples as symbols of love and beauty. Today we call something we prize as, “The apple of our eye!”

The early varieties of apples were green until the 1800s when they became more red because of selective breeding. Apples are an excellent source of fiber, malic acid, boron, and vitamin C. They also contain quercetin which can reduce your risk of cancer as well as support weight management. Apples contain 0 grams of fat or sodium and have no cholesterol. what perhaps attracts the most attention is the claim that apples give you more energy than coffee.

Eating apples are the perfect and health) option to help you stay energized all day. How healthy an apple is is best evidenced by its longevity. Apple trees can live to be about 100 years old. Apples are sometimes called “nature’s toothbrush,” Apples help clean the teeth and massage the gums.

Today, apples are the #1 fruit consumed in the US and are grown commercially in at least 32 states. There are more than 2,500 varieties of apples grown in the United States. Pilgrims planted the first U.S. apple trees in the Massachusetts Bay Colony. It is nice to cherish this in the context of a recent Thanksgiving Day.

Then we should not be surprised that the most famous computer company in the world is called as it is called. The bitten apple is one of the most expensive logos of today. And Apple products certainly justify the name they bear.

Of course, the Chicago Waffles didn’t neglect apples either. Come to one of our locations and enjoy the fantastic cinnamon apple pancakes, trust us you will not be sorry. The musical suggestion along with the fantastic meal is the great Erykah Badu and Apple Tree. 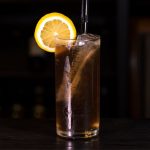 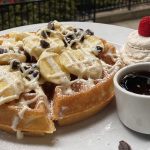