The amazing history of waffles

Have you ever wondered, while enjoying the juicy bites of your favorite waffles, where are the origins of this delicious food? We think that you will be surprised when we tell you a story about the time of their beginnings, and also that you will love them even more because of that. The history of waffles is somewhat mysterious.

Yet we can claim that waffles are considered one of the oldest desserts in history. The history and origin of waffles can be traced back to ancient Greece. But the history of their origin goes even further into history, in the Neolithic, or Stone Age over four thousand years ago.

These first waffles surely lacked tastes like an indented grid or maple syrup, but the core of what’s now a favorite breakfast food was still there— a cereal-based batter that was cooked not baked or fried, but toasted on both sides. The waffle in Old Greece was a fundamental variant of flat cakes, which were produced by baking the cakes between two metal plates. Obelios, as these cakes were called, weren’t especially sweet, but their design developed over time as people started customizing the food.

In Medieval Europe, the Catholic Church began making waffles to serve as a sort of companion to the communion wafer symbolizing blessings. These waffles were drawn with Biblical scenes, crosses, and other religious symbols, and were served after meals as a symbolic final blessing. When Church allowed making its own oublies (a name left over from the time of ancient Greece), increased designs incorporated family crests, landscapes, and numerous other creative decorations. And with numerous new spices that the Crusaders brought with them from their expeditions to the East, the taste itself began to change, improve, and acquire its specificity.

As they spread throughout medieval Europe, the cakes made from a mixture of flour, water or milk, and sometimes eggs, became known as wafers. Wafers were eaten by all segments of society, from peasants to kings. They were cooked over an open fire between iron plates with long handles, and over time irons became deeper, and gradually the wafer became the wafel, or the gaufre, as the French called it.

The two European countries that are perhaps most responsible for the evolution of waffles as we know them today are the Netherlands and Belgium. Dutch wafelers first began applying rectangular instead of circular plates. It was the forerunner of the modern waffle’s design. For the word, we know today, waffles are credited to the English who in the early 18th century added a second “f”.

Throughout Europe, nations evolved their waffle recipes and tastes. It wasn’t until waffles came to America, courtesy of the Dutch, that they were finally paired with maple syrup, a popular liquid sweetener that was cheaper and more widely available than granulated sugar, which had to be imported.

However, waffles only gained global popularity when they arrived in the States. In 1620 Dutch wafles come to America with the Pilgrims. Thomas Jefferson is said to have brought the first long-handled waffle iron to America in 1789. About 80 years later, in 1869, a Dutch-American called Cornelius Swarthout was granted a patent for the first waffle iron in the U.S. August 24th, the day this patent was granted, today is celebrated as National Waffle Day.

This was an amazing story about the development of waffles throughout history and their arrival in the States. Today we have a huge range of waffle variations to choose from. Waffles have become part of our tradition and an integral part of the most delicious breakfast.

Chicago Waffles is with you even at the time of the pandemic. Order online and enjoy your favorite flavors. 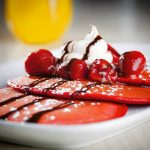 Add a Special Touch to Your Carryout Experience!Our Blog 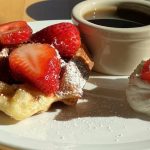