Everyday obligations and bustle we are exposed to make us often forget about the little things that make life happy. And those little things often make our lives fantastic. As with all the great things in life, there are many stories about their origins. That is also the case with a margarita. A cocktail that marked our epoch so much that it deserved a National holiday for a reason.

Some of the most famous stories of margarita origins are related to Mexico and the bartenders there. According to one of the legends a bartender, Danny Negrete, crafted the drink as a wedding gift in 1936. for his soon-to-be sister-in-law, whose name was, you guessed it, Margarita. According to another story. in 1938, Carlos “Denny” Herrera was charmed by the beauty of a showgirl who tolerated only tequila from liquors, and therefore he invented the margarita. However obvious the woman was the inspiration for the creation of this wonderful cocktail. According to cocktail historian David Wondrich, author of Imbibe!, the best guess is that the margarita as we know and love it evolved from a cocktail known as the “daisy.”

In mainstream media, it first appeared in Jose Cuervo ads as early as 1945, with the tagline, “Margarita: it’s more than a girl’s name”. The first written clue about this cocktail we have in 1965. The Oxford English Dictionary defined this drink as “a cocktail made with tequila and citrus fruit juice.” However, the actual invention probably happened in the 1930s. It was likely a product of the US/ Mexico border regions between the 1930’s and 1950.

Served in iconic glass margaritas attract from the start. And the glass itself became a symbol of good fun and advertisements for bars. The classic margarita recipe is 3 parts tequila, 2 parts triple sec, and 1 part freshly squeezed lime juice that makes an engaging dance of steady sharpness and salinity. The fact that Americans consume 185,000 margaritas on average per hour says a lot about how popular it is across the country. National Margarita Day 2021 is February 22 and is one of the most popular National Food Holidays.

A few margaritas guarantee a fantastic time, and its great popularity has led to the creation of various modifications of the original recipe. Chocolate margarita, strawberry margarita, pineaple margarita…even bacon-infused margaritas. Frozen margaritas, blended with ice, became popular in the 1950s along with other tropical drinks made with rum and tequila. By the 1970s, the margarita had exceeded the martini as the most popular American cocktail. It remains to be popular today.

We just adore margaritas. And that is why we made an effort to allow all our guests to enjoy their different margaritas variants. In addition to great food you can relax with a glass of margarita, or two. We know we will. 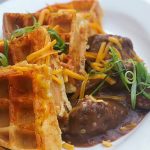 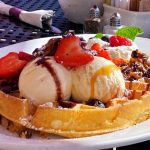