Waffles or pancakes, that is the question

Waffles and pancakes, so likewise, and so different. The two perhaps most popular breakfasts in the USA often have fans and proponents of one or the other. The ingredients used are almost identical. But because of the way they are cocked, they have a different taste. Which flavor do you prefer? Making the assumed right choice is something that each person must determine for themselves. As far as we are concerned, we enjoy both equally.

Not only do pancakes and waffles taste different, but they also don’t seem very alike, either. It turns out the visible differences transpose to a difference in taste. Their mixes generally have a similar base — eggs, butter, sugar, leavening agents, but that is where any resemblance ends.

Both traditional is mildly sweet and a little bready, although waffles are more so on both counts. Waffles generally have more butter and sugar in the batter and become more caramelized while cooking, so they savor a little richer. On the other hand, pancakes are softer and easier to eat.

Both take ice cream, syrup, or other sweet toppings as well as each other in a flavor sensation.

On average waffles are 14% fat, versus pancakes, which are 10%. Waffles contain less sugar at 2%, while pancakes press it up with 15%. Waffles are in the lead over pancakes with higher calorie, cholesterol, and salt figures. So, waffles are more likely to kill you, and that gives them an extra point.

Waffles are crispier and fluffier than pancakes, but pancakes are compacter and more filling than waffles. The tastes are not to be discussed, but the fact is that waffles hold syrup better than pancakes. On the other hand, the combination of flavors on the pancakes is unlimited. But if you have to eat in a hurry, standing, then waffles are a better choice because they are portable.

A great mix of flavors created just for you is waiting for you to enjoy in them. All you have to do is to Look at our menu and make the right choice. As far as we are concerned, we will opt for both waffles and pancakes. You can enjoy your favorite flavors again in our location since we are open for dine-in.

Waffles or pancakes, that is the question2021-02-122021-05-20https://www.chicagowaffles.com/wp-content/uploads/2015/10/logo-chicago-waffles.pngChicago Waffleshttps://www.chicagowaffles.com/wp-content/uploads/2021/02/chicago-waffles-blog-waffles-or-pancakes-that-is-the-question.jpg200px200px
Recommended Posts 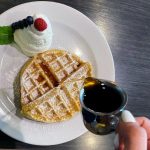 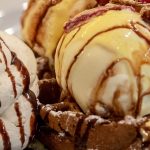