You want a piece of me?

We do not intend to start a fight, but we do intend to tell you some interesting facts about these very tasty pieces. Pieces of toast.

Bread is where the story of toast starts, of course. Archaeological evidence of flour goes back about 30,000 years, so flatbreads were likely made around the same time. We all know that toast is just bread that has been lightly burned or, if you’re not good at it, very burned.

Some food historians think that the Egyptians dried their bread in front of open fires around 3000 B.C. to keep it from getting moldy for longer. They figured out that if they left the bread out in Egypt’s warm weather, it would rise and keep its shape after being baked. But they also saw that after a few days in the dry air of the desert, the bread got hard and tasted bad.

In the past, toasting bread was a way to keep it fresh. The Romans brought the idea of toast to all of Europe, including Britain, and the colonists brought it to the Americas. The word “toast” comes from “tostum,” which means “to burn or scorch” in Latin. Before the electric toaster was invented, sliced bread was toasted by putting it in a metal frame or on a long-handled toasting fork and holding it near a fire or over a kitchen grill. Most likely, the first breads were toasted by putting them on a hot stone in front of a fire. Later, simple tools were made to toast bread in the fire, like wire frames to cook the bread more evenly or sticks like the ones we use to toast marshmallows over a campfire today.

Alan MacMasters, a Scotsman, created the first electric toaster in 1893, but it didn’t sell very well. The first toaster, which was made by British Crompton and Company wasn’t very good. All of the wiring was on the outside, which made it dangerous, and it could only toast one side of the bread at a time.

In 1905, two people from Chicago made an alloy that was very resistant to fire. That meant that other people could try again to make an electric toaster that was safer and worked better. Around the same time, several different kinds of electric toasters were made. These toasters could only toast one side of the bread at a time, and the bread had to be turned over in order to toast the other side.

The automatic toast-turner was made in 1913, and the semi-automatic toaster turned off the heating element when the bread was done. In 1919, the first “modern” timed pop-up toaster was made.

In the 1920s, more than a million electric toasters were bought by Americans, most of which were used right at the breakfast table. The first automatic toasters came out in 1926. It toasted both sides of a piece of bread and popped it out when it was done.

Of course, the Chicago Waffles menu would not be complete without a wide selection of French toast served with warm maple syrup, whipped cream, and sugar powder. Our choice is Red velvet French toast stuffed with cream cheese and topped with fresh strawberries, and we are waiting for you at one of our locations to choose your favorite combination. 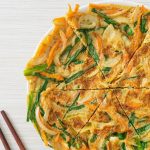 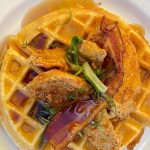